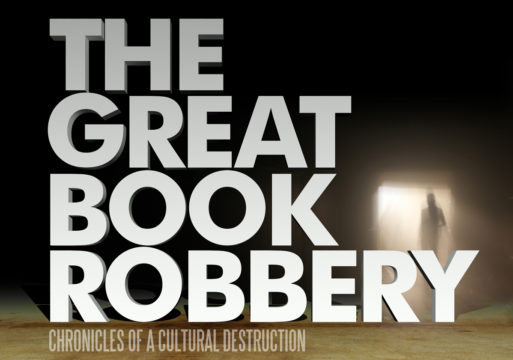 This film chronicles an unknown story of the destruction of Palestinian culture in 1948 through the account of 70,000 Palestinian books that were looted by the newly created State of Israel.  When Palestinians were expelled from their homes, all that was left – furniture, musical instruments, carpets, and also valuable books – were there for the taking. First soldiers walked from home to home and took what they wanted. An hour or so later, official looters would arrive. Nothing remained. Thousands of books arrived at the National Library and the Hebrew University, labeled, AP: Abandoned Property.

The film interweaves various story lines into a structure that is both dramatically compelling and emotionally unsettling. The interviews center on eyewitness accounts and cultural critiques that place the book theft affair in a larger historical-cultural context. In the process, new light is shed on the Palestinian tragedy of 1948, and the Israeli narrative of the 1948 war is deconstructed.

Benny is a Dutch-Israeli filmmaker. He has been writing, directing, and producing documentary films internationally since the early 1990s.

He makes critical political films that side with the dispossessed, the unrepresented and ‘the other’. His films concern subject matters such as the Israeli-Palestinian conflict, Jewish and modern Israeli culture and history, European culture, politics and history and inspiring individuals.

Benny will join us via Skype.