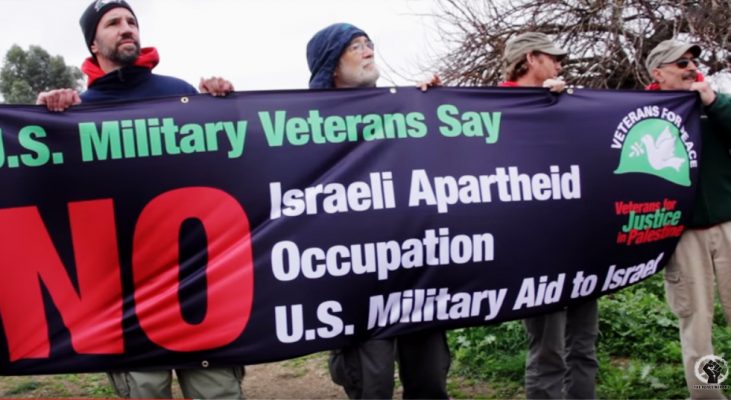 This film follows a number of U.S. Veterans who spend time with Ahed Tamimi and experience the ruthless brutality Palestinians endure and the steadfastness of the Palestinians in the face of guns, tear gas, racism, and their refusal to be drawn into it. They continue to strive for non-violent resistance.

US Military Veterans who stand with them, and say NO to Israeli Apartheid, NO to occupation and NO to US Military aid to Israel.

Veteran Matthew Hoh, former US Marine says, “You can read all kinds of books but you really have to be here to understand what is occurring here, how settlements are utilized to punish and humiliate these Palestinian people. Settlers, many who carry guns, come and harass and spit on the Palestinians who are involved in non-violent protests, to enrage them, and then they feel justified to kill them. And Israeli soldiers just stand by. Its like State sponsored gang support. Soldiers and settlers kill Palestinians all the time and no one is ever convicted.”

“This documentary,” says Ellen Davidson, photographer and delegation coordinator, “allows the viewer to meet the human beings, through visuals and audio of actual people, to help those in the United States understand how important this issue is.”

Through this powerful film and the experiences of Ahed Tamimi and her family, and the veterans who accompany them. you come to see and touch the meaning of occupation. It is a life for this generation of Palestinians and generations that follow. “And those who dare to protest by means of non-violence,” says Hoh, “are the bravest people we have ever seen.”

Tarak Kauff has been active in anti-war, peace and justice activities since being discharged from the U.S. Army paratroopers in 1962 after 3 and 1/2 years of stateside duty. He organizes with the Veterans For Peace Direct Action Group and started the Veterans Peace Team. He was one of the founders, along with Kim Carlyle of War Crimes Times, the hard copy and online Veterans For Peace newspaper. A member of the Veterans For Peace Board of Directors, he is also one of the original members of Middle East Crisis Response. He lives in Woodstock, NY.

Ellen Davidson Ellen Davidson is a longtime activist and photojournalist. She has traveled multiple times to the Occupied West Bank, including twice with Veterans For Peace Delegations. She has also helped lead VFP delegations to Okinawa; Jeju Island, Korea; Standing Rock; and Ferguson, Mo. She works with The Indypendent newspaper in New York City and co-edits the Veterans For Peace quarterly newspaper Peace In Our Times.