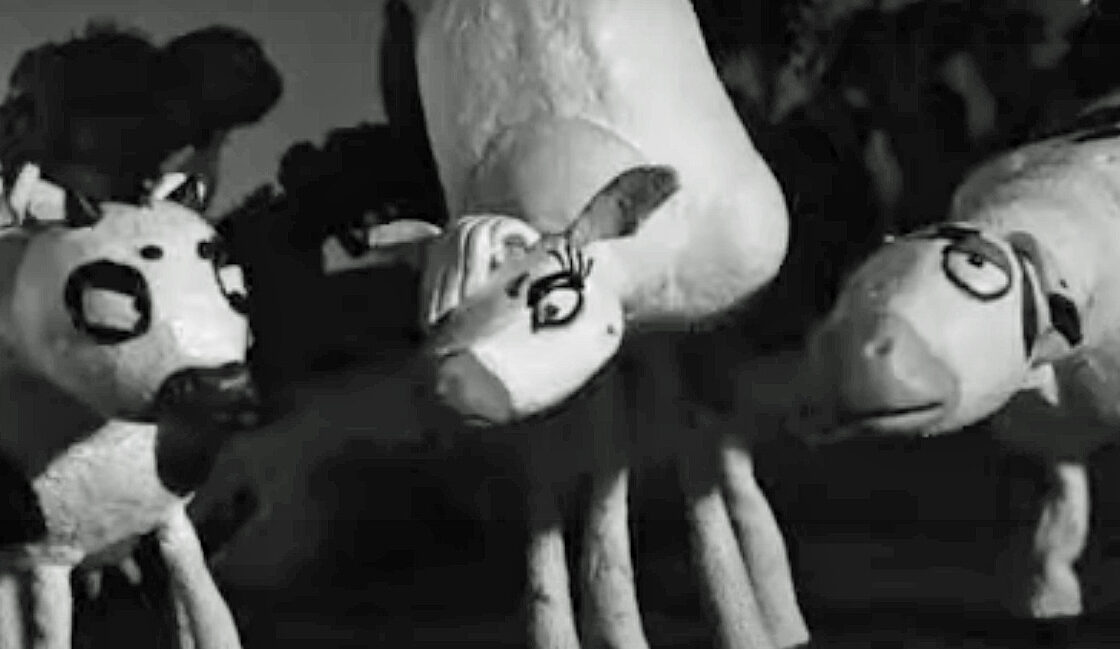 Is it possible that eighteen cows present a security issue for the Israeli Defense Force? Indeed it is. They become The Wanted 18.

This delightful film mixes animation of the cows with the real-life situation of Palestinians attempting to survive. As Palestinians must also do to get by, the film adds humor to a deadly serious matter. The people shown are not actors; they’re the actual people of the village.

This is the story of the intifada as it played out in Beit Sahour, a Bethlehem suburb, in the late 1980s to early 1990s. A group of Palestinians tried to break the Israeli stranglehold on supplying goods by purchasing eighteen cows from Israel in order to produce an independent supply of milk. However, once they had the cows, the Israeli government became concerned it could set off widespread civil disobedience, so the villagers make a strong effort to the hide their bovine property amongst the town people.

The animated cows tell us they’re pissed at having to move to Palestine. The cows and their milk become part of the larger intifada consisting of “Neighborhood Committees” and “Unified National Leadership” refusing to pay taxes to the Israelis and boycotting products from Israel.

In a comment both humorous and poignant, one villager says the Israelis came around with photographs of cows asking, “Have you seen this cow? These cows are dangerous to the security of the state of Israel.” Palestinians ask, “So if you didn’t want us to have these cows, why did you sell them to us?”

Amer Shomali (عامر شوملي) is a Palestinian multidisciplinary artist, using painting, digital media, films, installations and comics as tools to explore and interact with the sociopolitical scene in Palestine focusing on the creation and the use of the Palestinian revolution iconography.  He holds a master’s degree in animation from the Arts University Bournemouth in the United Kingdom and a bachelor’s degree in architecture from Birzeit University, Palestine. He was born in Kuwait in 1981, and is currently based in Ramallah, Palestine.

“…What distinguishes Amer as an artist from many of his Palestinian artist peers is the great care he places in searching for the connection that was once found between artistic expression and the people in the Palestinian context. Amer strives for his works to find a way to reach people and to contribute to the revival of the collective consciousness. He does this not with the aim of reproducing the past but through a questioning of history and heritage and being critical of the present, yet always with an emphasis on the aesthetics of the artwork and its ability to be contemporary…”   —  Mahmoud Abu Hashhash

Follow some of Amer’s Selected Works or read about his career..