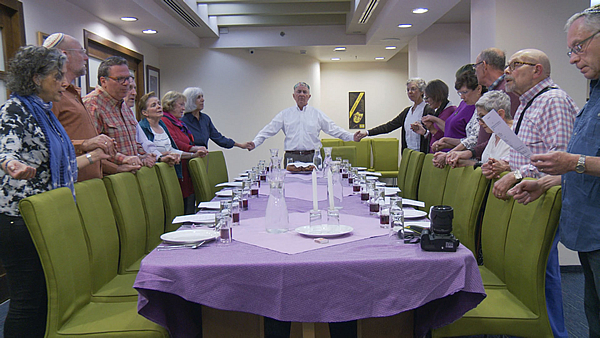 Register with Vermonters for Justice in Palestine: to stream the film and for Zoom discussion.

Here’s a good alternative to travel to Palestine during coivd-19. As expressed in an opening card, this documentary shows “an experience or an encounter” not a tour. In 2016, a rabbi invited a group of Americans to join him on a trip to introduce them to Palestinians living in the Occupied Territories and East Jerusalem.

“I wanted Americans, and American Jews in particular, to have the opportunity to meet and get to know some Palestinians as human beings, just like themselves, with the same hopes and fears and dreams,” Rabbi Dov Taylor said.

Anne Macksoud and Old Dog Documentaries partner John Ankele have produced and directed documentary films since 1985.  Before transitioning to film and video production, she spent 17 years as a teacher of English literature, photography, and music. Once Anne discovered the “eye-opening” power of the documentary medium, she brought rented documentaries into her classroom on a regular basis. Eventually, she began helping her students make their own films and slide shows on the issues of the day (civil rights, the Vietnam War, and global poverty, to name a few). She approaches filmmaking from the perspective of an artist as well as an educator.  Anne writes, “our political leaders cannot solve the problems of our time. They themselves are too beholden to privileged, powerful constituencies motivated to preserve the status quo. Change must start with ordinary people who understand the interrelatedness of our global community. Ordinary people have the will, resourcefulness, and compassion to craft new solutions serving our common good.  We offer our films as catalysts for this kind of solution— as tools for education and activism in the name of social change.”