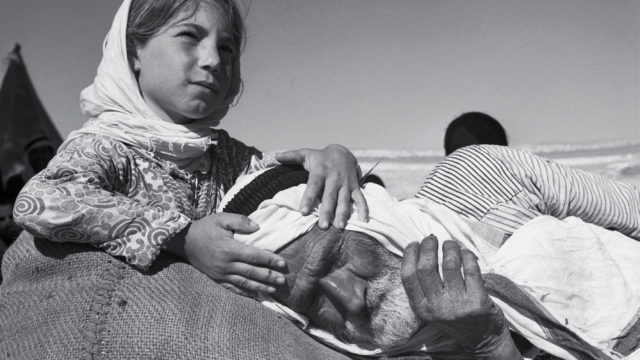 Through riveting and moving personal recollections of both Palestinians and Israelis, 1948: Creation & Catastrophe reveals the shocking events of the most pivotal year in the most controversial conflict in the world. It tells the story of the establishment of Israel as seen through the eyes of the people who lived it. It is simply not possible to make sense of what is happening in the Israeli-Palestinian conflict today without an understanding of 1948.

This documentary was the last chance for many of its Israeli and Palestinian characters to narrate their first-hand accounts of the creation of a state and the expulsion of a nation.

Ahlam Muhtaseb is a professor of media studies at California State University, San Bernardino. Her research interests include digital communication, social media, and diasporic communities. She has published her scholarship on digital communication and other communication sub-topics, and has presented her scholarship to national and international conventions and scholarly meetings. Most of her recent research focuses on digital media and social movements online (cyber activism), and Arab and Muslim images in the media.

Andy Trimlett has a Master’s degree in Middle East Studies from the University of Washington and a Bachelor’s degree in International Security and Conflict Resolution from San Diego State University. He has more than a decade of experience in public television, having served as senior producer, associate producer, editor, and camera operator on a wide range of productions. He has worked on PBS programs in the United States, Hungary, and Austria, winning a regional Emmy for a 30-minute documentary he co-produced about property tax law in California.