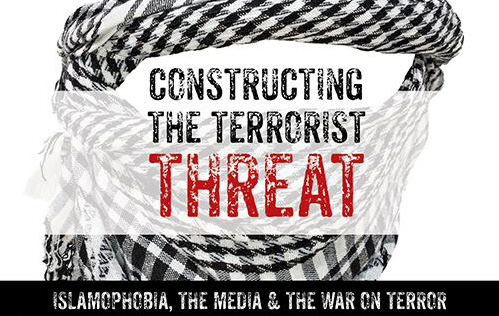 Constructing the Terrorist Threat offers a clear-headed assessment of terrorism that couldn’t be more timely and urgent given the politics of fear that now dominate our political landscape.

Deepa Kumar, one of the nation’s foremost scholars on Islamophobia, looks at how Muslims have become the predominant face of terror in U.S. news and entertainment media — even though terror attacks by white extremists have far outnumbered attacks by Muslim Americans since 9/11.

Arguing that racialized threats have long been used to induce moral panics and advance anti-democratic policies, Kumar explores how ruling elites have been raising the specter of Arab and Islamic terror since the 1970s to justify militarism, war, and curbs on civil liberties. From the Iran-Hostage Crisis in 1979 to the “war on terror” after 9/11 to the rise of ISIS today, Kumar argues that Americans have been taught to fear Muslims out of all proportion to reality. Kumar presents a wealth of eye-opening data about the actual threat level posed by Muslim terrorists in the United States.

Dr. Jim Bowman is an Associate Professor of English at St. John Fisher College. His research and teaching interests include Middle East politics and cultures, with a focus on Turkey and Cyprus. His current teaching and research focuses on the global human migration and refugee crisis and its effects on societies around the world. He is currently editing an anthology about global civic engagement in higher education. In collaboration with colleagues at Fisher, he has worked since 2011 to organize public events to promote better understanding of the Middle East.

Dr. Robert Dunbar is an expert on the Middle East and Muslim Central Asia, having earned his doctorate in Central Eurasian and Near Eastern Studies from Indiana University. He is a visiting professor of religious studies at St. John Fisher College.

Dr. Dunbar has devoted his life to the study of the Muslim world and to sharing his knowledge of the histories, religions, languages, and cultures of the Middle East and Central Asia with his students and peers. His most recent excursion was to Uzbekistan in the summer of 2018; he hopes to get to Morocco in the summer of 2019, and eventually, God willing, to visit Iran in the not too distant future.